They melt hearts and they can break them

They sing praises and they can inflict pain

They build you up and they can tear you down

How much thought do you put into the words you use?

Before you speak, do you consider the affect your words will have on your life, on the lives of others?

A few weeks ago, I can across the short story below - it is an excellent example of the power of words. 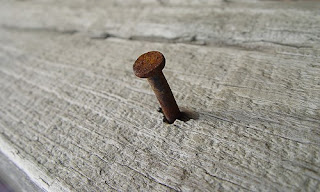 There once was a little boy who had a bad temper. His father gave him a bag of nails and told him that every time he lost his temper, he must hammer a nail into the back of the fence.

Finally the day came when the boy didn't lose his temper at all. He told his father about it and the father suggested that the boy now pull out one nail for each day that he was able to hold his temper.

The days passed and the young boy was finally able to tell his father that all the nails were gone.


The father took his son by the hand and led him to the fence. He said, "You have done well, my son, but look at the holes in the fence. The fence will never be the same. When you say things in anger, they leave a scar just like this one. You can put a knife in a man and draw it out. It won't matter how many times you say I'm sorry, the wound is still there."

The little boy then understood how powerful his words were. He looked up at his father and said "I hope you can forgive me father for the holes I put in you."

"Of course I can," said the father.

It's not always anger, it is your actions in general. There are no "fresh starts" in life. There is no new beginning. Forgiveness comes easy for many people but the scars of the past, they never go away. Watch what you do today, because sometimes the price isn't worth the reward.