Do You Make Time for You?

In this modern day, fast paced, wired in, online all the time world, it is so easy to focus on everything but ourselves.

In all this hustle and bustle, what about you?

I get it, I get it, you want to be on and ready for everyone, but what about being "on," and "ready" for your life?

Taking just a few minutes a day, for yourself, can radically improve your focus, your energy, your mood, your efficiency, and your health.

This super short Vlog entry is all about you taking time for you.

After you watch it, leave a comment and let me know what you are doing for you today.

From Silent to a Voice

Some things you may not know about me:

I grew up feeling shy, insecure, and ashamed.

I felt a tremendous amount of guilt - felt responsible for my parents financial situation.

At around eight years old I wanted to kill myself - tried to push a knife through my heart.

I felt ashamed I could not follow thorough with it and carried that burden and responsibility for a long time.

Throughout most of my teenage years my morning routine consisted of:

Spending time in front of the mirror telling myself how worthless I was, how ugly I was, how I was a mistake, how no girl would ever want to date me, how I must be God's punishment to my parents.

The irony of this is in my quiet moments of listening there was a faint voice that said I was meant for more.

I have always wanted to help people - ever since I was around 9 to 10 years old I knew that was what I was put on the earth to do.

Problem: I was not going to help anyone the way I felt about myself.

I said I was shy and insecure.

Insecure because I was so uncomfortable in my own skin.  When I started high school I broke out in hives the first week - was so afraid that people would find out what a horrible person I was and I would end up in the trash can.

Insecure because I thought so lowly of myself that I thought there was no way anyone could think any higher of me.

Shy - I could not make eye contact without going pink in the face.  I could not talk to a stranger, especially a female without turning purple and breaking out in a full on sweat.

There was still that faint voice that said I was meant for more.

I tried listening to the voice, but would always derail myself - limiting beliefs and negative self talk will do that and I was a master of both.

I won't go into the full story of transformation here, I have written on that before and that is not the intent of this blog.

What is the intent is to talk about that faint voice and how it lead me to writing this to you today.

It would whisper that I had a message to share, but the problem was I could barely speak up to a stranger let alone a crowded room.

As I began to make changes in my life the voice became louder.

As I began to follow the steps laid out by various mentors and coaches, the voice became louder.

As I began to believe in myself, the voice became louder.

As I began to help people make positive changes in their lives, the voice became louder.

As I began to realize and live my mission, my purpose, the voice became louder.

I knew I needed to start speaking, presenting, get on stage and in front of a camera to facilitate trainings, workshops, and events.

My focus shifted to doing that.  Tapped into resources like Toastmasters.  Began listening to speakers/presenters when driving, when working out, when brushing my teeth etc...

Started speaking in front of the camera.  Have put myself out there continuously - 100's of videos have been published.  It took 1000's of attempts to get those 100's.

One of my personal speaking goals is to one day attend the Toastmasters International Convention as a competitor. Yesterday, (Saturday) I took a step towards that goal winning round two of the competition for my area. (See picture below).

I share the above as I hope it inspires you.

Inspires you to see that my story is likely not that different than yours.

I grew up in a small town from humble beginnings.

I walked through most of the early part of my life with my head hanging down, ashamed of who I was.

I walk tall today not because of my height, but because I know how it feels to make transformational changes in ones' life.

If you are in a space in your life to receive inspiration about what could be possible for you, I hope you receive this blog as that inspiration.

If I could do it, I promise you that you can too.

Need a little help getting started on your journey, it would be my honor to do so.  Click this link to get the process started.

Any questions, leave them in the comments below. 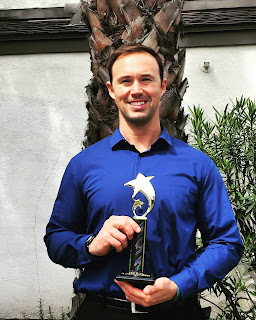 What would happen if you no longer feared rejection?

One of biggest fears shared by many of us is the fear of rejection.

Dreams will be dismissed before they even begin when faced with the prospect of rejection.

One "no," can lead to a lifetime of what could have been's.

Great love story's, amazing inventions, and much more remains unrealized because the prospect of potential rejection becomes to much to face.

Every day I am blessed to be able to speak with people from all over the world.  So many of these amazing people are living a life that is less than what they desire because they fear the potential of rejection.

Recently I came across a TED talk where the speaker made it his mission to tackle rejection head on.  Having lived much of his early life "safely," to avoid being rejected, he decided to make a challenge ( it reminded me very much of my own 1 Year 1000 Challenge) to basically seek out rejection for 100 days straight.

The video is about 16 minutes long, it is funny, it is insightful, it is inspiring, and it is well worth the investment of time to watch it.

As a side note - the story about the doughnut shop he mentions in here, I remember hearing that story when it first happened. Perhaps you did too?

What did you think his talk?  Are you willing to risk the potential of a "no," so that you can get a yes to living the life you want?